It is mainly crusher dust for most of the trail. The going is flat and easy. There are toilets at regular intervals and benches to sit for a rest. Other than where the trail backs onto the shops by the quay in Dieppe town center, it would be best to go prepared for a picnic as there are busy roads to negotiate in order to access the shops on the Riverview side of the river. If you love wildlife, be sure to take your camera.

We parked at the empty parking lot just before the fuel station on the 106 in Dieppe right beside the Riverside trail and the first thing that you notice is the fresh salty air clearing your nostrils as you ride along the river’s edge. I grew up not too far from the sea and it brought me back pleasant childhood memories. 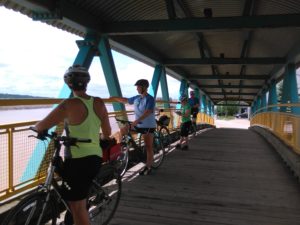 The Riverside Trail on the Dieppe side takes you past lots of food places with easy access to the shops. There’s a pier and parks and there is lots to attract the eye including the tribute to the Mounties who were killed in the line of duty a few years back. We crossed the river via the road bridge which has a wide sidewalk for cyclist & pedestrians. It also has places to stop and enjoy the beautiful panoramic views of the marsh.

On the Riverview side we headed east as far as could go along the marshes. It was marvellously tranquil with lots of places to stop and read about the various types of birds and wildlife. I saw a red winged black bird for the very first time and learned that it was affectionately known as a sergeant major bird owing to its orange/red epaulettes on its shoulders. Very pretty.

Further along we found Momma duck taking her tiny fluffy ducklings out for a paddle. Even the most macho of hearts in the group was heard to say ‘aaaw’.

It made me chuckle watching the ducks bobbing on the surface and it reminded me of a joke that the water is not very deep because it is only up to the ducks belly … and then the duck stood up and you really could see underneath its belly! (The irony was too much for me not to smile).

The Petitcodiac River is tidally fed from the Bay of Fundy which has the highest tide in the world. The highest being 31.9ft but never less than 26ft. The speed of the water coming in and going out really is most fascinating. 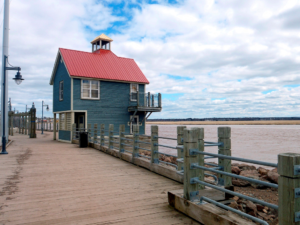 We retraced our journey back to the Dieppe side which was still equally as fascinating going the other way as the tide was now on its way back out to sea and was revealing its mud banks and what I can only describe as the largest blue heron that I have ever seen! He didn’t seem to be too bothered by our group ogling and taking pictures. It was a sight.

We continued down the Dieppe side towards Memramcook and saw a young buck watching us in fascination. It must have been either my lily white legs or he was admiring my limited prowess on a bicycle.

A little further along we had to stop to allow a convoy of ducks to make their crossing … apparently the grass is greener on the other side of the marsh!

We did about 27km in total and by no means saw everything, it was all level riding, on either pavement or packed crusher dust. The tranquility, wildlife and the amazing salty air was a true pleasure to experience. There are plenty of places to stop for a picnic, quick easy access to shops and places to eat and there are plenty of washrooms in case the ‘other’ nature calls too. :0)