The Velo NB Advocacy Chair, was created in October 2015 in response to the growing movement and support to recreational cyclists. The increased requirement for safety awareness and assistance in the pursuit of healthy and active lifestyles for New Brunswickers is the goal.

The Chair is focused on the following areas: 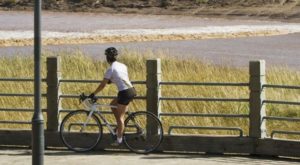 The role of the Velo NB Advocacy Chair is to be the public voice for recreational cyclists in NB. NB cyclists have the responsibility to be the advocate of their own safety on NB roadways and their healthy lifestyles.

We are stronger as a community of cyclists working together to improve cycling in NB.

Over the course of the 2016, Velo NB had been in discussions with different Government officials concerning a 1 Meter Law in the Province of New Brunswick. Discussions had taken place with department officials and elected representatives on various aspects of what the law would be, and how it would work in the province.

To start 2017, we are continuing this push with government officials and all involved in the process at the municipal and provincial level. Wayne Arrowsmith, the Velo NB Advocacy Representative has been in touch with local cycling advocates across the province, gaining support for the 1 Meter legislation.

On February the 16th, an amendment to the Motor Vehicle Act was tabled in the legislature. The aim to to improve safety for all cyclists and motorists. We are committed to making sure safe riding is available to all cyclists in our province.

On April 26th of 2017 EllensLaw received third and final reading in the Legislature and will receive Royal Assent on or about May 5, 2017. This will provide New Brunswickers with a one metre law to further protect them when riding on NB roadways. It is a significant milestone for cyclists in our province! A bike ride to celebrate the enactment of EllensLaw is scheduled for 11:00 AM May 5th leaving from the Legislature Building in Fredericton!

Hopefully further amendments to cycling laws will be coming in the future. A working group formed by the government in early 2017 to provide advice on the design, development and delivery of bicycle safety policy is scheduled to begin meetings in May 2017. It will include four members of an advocacy committee working with Velo NB to promote safer cycling.

For more information on the proposed legislation, as well as a Summary of action see the links below. These documents were done with the help of Saint John Cycling, and Folks on Spokes Fredericton. The support of these clubs as well as local cycling communities across the province is greatly appreciated.