Caraquet is a beautiful picturesque Acadian fishing village in northern New Brunswick with breathtaking coastal scenery. After you leave Caraquet, there’s a place to grab food at Bertrand and a lobster snack van on the highway 11 between the two.

The bike/pedestrian trails around the town are paved along the old railway line including the beach walk to the harbour. Where the paving ends the surface is crushed gravel. 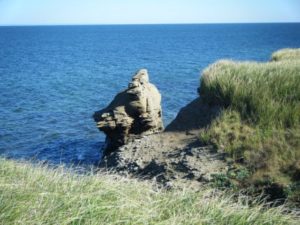 The highways are two lanes wide with a single cycle lane. The highways are straight and wide with very few elevations of any significant gradient. Even though it is a popular tourist area, the traffic is light and courteous towards cyclists.

We stayed at the Hotel Paulin in Caraquet. It’s a great hotel for cyclists but you will need to make your reservations a long time in advance as they are usually fully booked during the tourist season. Most of the B&B’s in Caraquet accommodate cyclists with lockable storage for bikes, as tourism is their bread and butter.

From our hotel we headed west along the trail towards Bertrand. Just outside Caraquet is a fromagerie with all kinds of cheeses on display. You can see the building from the trail, but the large sign can only be seen from the highway. It has a giant chair to sit on with a friend for a humorous photograph as it makes you appear small. If you love the idea of fresh cheese curds then it will be a race to beat the locals as the fromagerie is usually sold out by 1pm. 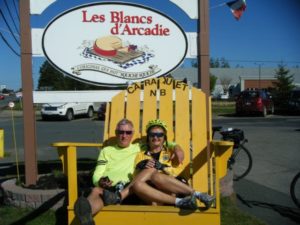 We grabbed our lunch at Bertrand at a little place called Resto Chez Isa, it looks like a house from the highway, but has a patio to the side and they bring your food out to you. They also serve alcohol for those who might enjoy an afternoon aperitif with their meal.

From Bertrand we picked up route 11 heading north until we got to route 303 where we turned right and headed west in order to follow along the shoreline. The 303 is not 100% paved and does get muddy being right on the coastline but it’s a great loop on a sunny dry day. If it’s at all wet it might be best to double back after visiting the point just past Maisonnette if not on a mountain bike.

At Maisonette it was brilliant to look across the bay to see where we had come from and look across at Caraquet from the perspective of the sea.

We stayed on the 303 until it re-joined route 11 where we headed south for home back towards Bertrand. It is a beautiful picturesque ride looking at all the painted houses with its rich history. The roads are straight and wide with a nice sized cycle lane just on the one side of the nicely paved road. There are no elevations of any major size and what traffic there was, was courteous and slowed down for us and gave us plenty of room.

We got back onto the bike trail at Bertrand and found a very unique lobster wagon run by a couple of lovely ladies located between the fromagerie and Caraquet on route 11 that runs parallel with the cycle trail. I can heartily recommend the lobster poutine for anyone wishing for a fast lunch or an early supper. After all, it could be considered quite rude n

ot to savour the local delights when having the opportunity thrust upon you in such a delicious smelling manner. :0)

Whilst on the subject of sampling the local delicacies, our hotel organised

A tour for us to visit Distillerie Fils du Roy, the local distillery about 20 minutes drive from our hotel. It is a family business and you can book a tour to see how it’s made and sample their wares. They produce whisky, gin and a cranberry liqueur. You can also buy what you taste to take home with you too. It’s powerful stuff!

I digress (having left you snacking lobster poutine just outside Caraquet … From the lobster snack van we continued along the cycle trail back to Caraquet and took the beach walk trail that is paved down to the harbour to see the fishing boats. The short 2km, scenic downtown harbor-coast path also makes a great after dinner walk as there is an interesting fresh seafood store of local produce (some are cooked for consumption) co-located with an ice-cream store (Cremerie Promer), right at the harbor’s entrance. Well worth the trip because just as you think you’ve walked off supper, you top back up again with ice cream! 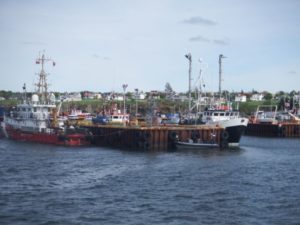 I love to see the fishing boats, being a country mouse myself, I admire the fishermen who work with Mother Nature as does the farmer but there’s something unforgiving about the sea and it must be a hard way to earn a living. Perhaps that might explain why there’s a distillery.