Shediac is such a pretty fishing village and has good reason to be so popular with the tourists. The great news about this trip by bike is that the biggest hill is on the bridge at Cocagne with beautiful coastal highway for most of the journey.

The closer to Shediac that you get the better the road condition and nice cycle lanes appear. Remember to take your camera. There are plenty of places for a cuppa or an ice cream along the way too. 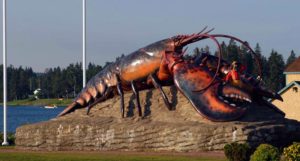 Shediac is known as the “Lobster Capital of the World” and hosts an annual festival every July to promote its ties to lobster fishing. There is also a 90-tonne sculpture alleged to be The World’s Largest Lobster.

We departed Bouctouche south on highway 134 and crossed both inlets of the Bouctouche Harbour estuary. After the second bridge we turned left onto Route 535 and hugged the shoreline almost all the way to Cocagne.

It was most fascinating to see the cages for raising mussels and lobsters in their rows. We reconnected with Route 134 again to cross the bridge of Cocagne harbour.

On the other side we branched off of the 134 and turned left onto Route 530 to stay closer to the coast and fresh salty air. FYI, where the 530 meets the Grande-Digue road you can either go straight ahead as a short cut or turn left for the big loop out to the coast again which the faster riders preferred in order to give us slow pokes a bit more of a head start … and enough time for a sneaky ice cream! :0)
After Grande-Digue we reconnected with highway 134 heading south again to cross the pretty stream and then on to Shediac bridge which is a single lane but has plenty of room for cyclists. 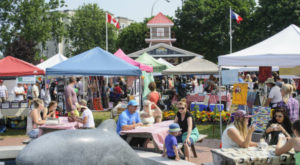 We stayed on the 134 with occasional distant views of the coast until it met the 133 at Gilberts Corner (You just keep pedalling straight). The 133 brings you all the way to Shediac Main St. We headed left for all the shops and things to do and see and take lots and lots of photographs … even the one that I know you will take of your head inside the jaws of the World’s biggest Lobster for your next Christmas card. :0)

Allow yourself plenty of time to spend at this exceptionally fascinating and very pretty fishing village as there is so much to take in and so many shiny things to help part yourself from your hard earned money. LOL

The return trip back the same way is equally as inspiring and proves that you really cannot have too much of a good thing.