There are no cycle lanes as such, but the roads are nice and quiet with no big hills and arguably the best coastal scenery in Eastern NB. 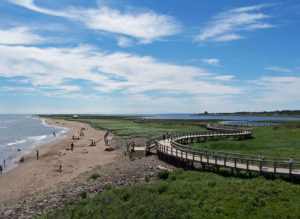 There’s plenty to see and do along the way including stops for ice creams and food as an excellent excuse to take in more of the views and awesomeness of nature.

There are regiments of lobster cages that are lined up in their rows, the Irving Eco-Centre, stunning coastal scenery, fresh salty sea air, the views across the bay of the windmills on PEI, fishermens boats, the quaint picturesque lifestyle of the fishermen and farmers that takes you back to another era in time far away from the hustle and bustle of modern life.

We headed north on Route 475 following the Bay of Bouctouche. There were more of the fishermen’s cages for catching mussels and lobsters. Our first stop was a visit to the Irving Eco-Centre which has a 12km sand dune across the bay. You can even see the windmills on PEI.

The question that I ask myself is how early does it have to be in order for it to be too early for an ice cream? … I don’t believe that there is such a time!

Afterwards we continued along the 475 which did appear to get quite rough in places. The Cote Saint Anne area has a few slight gradients to bring you down a gear, but it is still less work than a head wind when right against the shore.

Where the 475 meets with Route 505 we turned off right. The 505 is a better road, there are still no cycle lanes, but a nicer surface with less traffic.

In places where the route ventures away from the coast it is strange to see so many fishing boats and baskets so far away from the water.

Eventually the 505 starts hugging the coastline again and it is lovely to see the windmills across the bay in PEI once again. I was rather fortunate to observe a bird dive into the sea and catch a fish. I have never seen anything like that before and it was quite a moment for me.

To get to the lighthouse you take the Cap Lumiere Rd (head straight on) where the 505 veers sharp left towards Richibucto village. I have always been fascinated by lighthouses and can’t help but wonder how much of a lonely life it must have been in the olden days especially in the remote locations where the conditions were bleak.

The good news is that the return trip back the way we came is equally as stunning … with another chance for more ice cream! 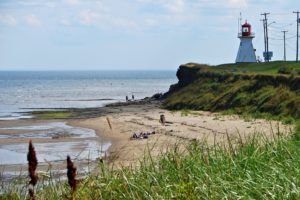 te Marie de Kent where they headed east back to Bouctouche.

With the choice of doing a loop or having ice cream … for me it’s going to be the ice cream. The beautiful coastline is just the icing on the cake to a really superb day.