OVERVIEW:
Shippagan is a beautiful picturesque fishing village west of Caraquet with a causeway that joins itself to Lameque Island with scenic flowers, a host of wildlife, well-kept houses and friendly locals. The ride is mainly level on good paved roads. The traffic is heavy in the built up areas and on the causeway but there are cycle lanes. On the quieter roads there are no cycle lanes but the traffic slows down and respects cyclists. The further north the less the traffic. The only places for food or refreshments are Shippagan and Lameque, so make sure that you are well prepared. 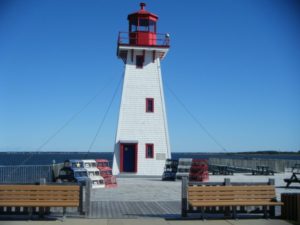 The optional trip to Miscou lighthouse will add an extra 52km to your journey so make sure to prepare accordingly as there is nowhere to purchase refreshments until you get all of the way back to Lameque. Yes the views will be breathtaking, but so too is the head wind even through the island is mainly level. Take plenty of water.

We started off at the Aquarium beside the lighthouse which is located at the end of a 2km boardwalk/cycle path that follows the shoreline of Shippagan. The Aquarium is a great place to bring the kids. The lighthouse is adorned with lobster cages painted red, white and blue in the manner of the French flag. If you happen to wonder what the little gold stars represent, that indicates that they are Acadiene.

We got onto route 113 and headed for the causeway, which is just under a kilometer in length and takes you across the bay to Lameque Island. There is a cycle lane but where it narrows on the old lift bridge with its steel surface there is none and you join the traffic and even though it can get busy, everyone plays nicely and takes their turn. There is a walkway, but it is very high.

We chose to stay on the 113 until the bridge that takes you over the bay to Lameque where we took the 305 east across to Cap Bateau on the opposite coast of the island. The ride is mainly level on good paved roads and the

views are scenic with an assortment of pretty flowers, wildlife, ornate well-kept houses and friendly locals.

We then followed the coast as far as we could north in order to take in the stunning views of the Gulf of Saint Lawrence. It was a dead end but was worthwhile and we had to back track to Pigeon hill in order to pick up route 310 to take us back to Lameque. 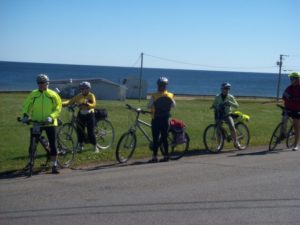 Along the 310 we found ourselves getting a little peckish and happened upon a boulangerie. All that was left to purchase was what came by the bag-full, which in turn created its own comical scene outside with the most hilarious game of bakers swapsies that you ever did see. Someone with a bag full of croissants doing a deal with the owner of a bag full of cookies, bread rolls were being swapped for just about anything as long as it was not more bread rolls and so it went on! When the owners had finally finished laughing, I feel sure that they offered to make us coffee for the entertainment value of seeing full grown adults walking around with their bag full of goodies trying to persuade others the merits of their wares for a trade.

Where the 310 meets the 113 the group split up. Those wanting to do the extra 26 km to the Miscou lighthouse headed north east and the rest of us went south west on the 113 to Lameque.

If you do go to Miscou lighthouse it will add an extra 52km to your journey so make sure to prepare accordingly as there is nowhere to purchase refreshments until you get all of the way back to Lameque. The good news is that the traffic gets less the further north that you go and the view is stunning, the not so good news is that the head wind will bring you down a gear or two as there is little protection to shelter you from it.

Once you get into Lameque the traffic does get heavier but the roads are wider with faded cycle lanes. There are plenty places to food and an ice cream. 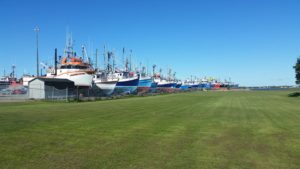 On the final leg home there is a pretty estuary after you leave Lameque with good cycle lanes, but about 0.5km after the bridge we found a newly paved cycle trail that runs parallel with the road and brings you to within 0.5km of the causeway that takes you back to Shippagan. We rejoined the 113 that brought us all but back to the Aquarium.