A trip along the Fredericton Northside Trail to Keswick, around the Mactaquac Dam and back via the Valley Trail. 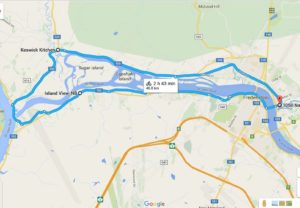 Where the Northside Trail crosses highway 105 near Keswick Landing, turn left onto the highway and follow the 105 until it T-junctions at the reservoir of the Mactaquac Dam. Turn left and cross the Mactaquac Dam.

After crossing Mactaquac Dam turn le into highway 102.
Stay on highway 102 until the Fredericton City Limit sign.
After City limit sign look for the Valley Trail sign on the river side of the high- way located on the trail.
Stay on Valley Trail (eventually crossing the 102 again) until Rookwood Avenue. Turn left.
At the bottom of Rookwood Avenue cross Woodstock Road at the pedestrian lights and turn left.
Follow Woodstock road for 50 meters before turning right towards the river. Wheel your bike around the rope cordon and head for the small building just ahead.
At the building turn right onto the South Riverfront Trail.
Stay on the South Riverfront Trail beyond the lighthouse until you get to the Bill Thorpe Walking Bridge.
Turn left onto the Bill Thorpe Walking Bridge to cross the river.
Stay on this trail back to the Trail Visitors Center.

The Mactaquac Dam on the St. John River 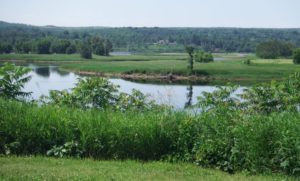 This picturesque ride traverses the north and south sides of the Saint John River, using a combination of trails and main roads. The scenery at times is spectacular, with glimpses of the river at some points, and a view of the Mactaquac head pond that is magnificent. The route follows the Northside Trail across several streets, then meanders along the river through wooded areas. At Keswick Landing there is a pub and drug store. Those wishing to go on face an uphill stretch between the Landing and Mactaquac, but the views make it worthwhile. After crossing the dam, you can turn left along the main highway or cut through French Village, and head back towards Fredericton Town Centre, picking up the Valley Trail at Island View.

Our trip was all about the social niceties of a pub lunch at Keswick Landing and the talking point of cycling across the Mactaquac dam.

The sun was out on a 29c perfect summer’s day. We started off at the Trail Visitor Center, Station road located on the Northside where the parking is free and we could get a free visitors map of all the trails in the Fredericton area. 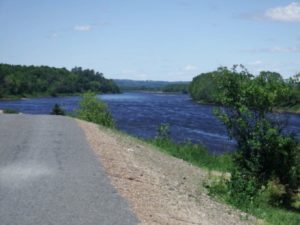 Views of the St John River litter your ride.

We followed the Northside Trail which pretty much took us straight there. Once we were clear of Fredericton, the trail followed the river all the way which conveniently runs parallel with the highway (Route 105) and while we were at Douglas those of us with a less delicate frame indulged in an ice cream without the worry of spoiling our appetite for lunch.

I loved it along the river, there’s an air of tranquility about a body of water that feels somehow rather special. ere was also plenty of shade which was perfect for such a hot day.

It was 18km to Keswick Landing and those that wanted to turn back and return the way that they had just come did, and those that weren’t too full from lunch chose the return trip via Mactaquac dam, the ones that were too full took a snooze and we, (maybe or maybe not a er our snooze … did I mention that it was hot and we had an ice cream?) decided to take a trundle over the Mactaquac dam.

From Keswick Landing we rode along Route 105. It is a surprisingly busy road with no cycling lane even though it is such a beautiful rural area and be prepared for a long climb which keeps going and going and going for about 3km which also gets steep in some places. e good news is that about 3⁄4’s of the way up is the perfect excuse to take a break … you guessed it, an ice cream stop! (You can never have too much ice cream on a hot summer’s day on a long climb even with a full tummy especially if it is going to be your last opportunity until you get all the way back to Fredericton again)

When you do reach the top the view is marvelous and a cycle lane reappears. During the months of July and August there are guided tours of Mactaquac dam.

As we dropped down the hill towards the reservoir, we turned left off of the 105 in order to cycle across the dam. It was very fascinating and pretty at the very same time with so much to take in.

After crossing Mactaquac dam we joined Route 102 and headed east back towards Fredericton with paved cycle lanes on both sides of the road until we got to the Fredericton City limits sign. It is not marked on the highway, but you can just about see the Valley trail sign on the river side of the road where it was nice to get back into the shade of the trees again.

The valley trail follows beside the river and at Hartt Island camp ground there’s a food truck, more ice cream, mini golf and a water park. (I can neither confirm nor deny whether I had partaken in another ice cream, but it was still hot and sunny and I had just cycled all that way!)

We continued the Valley trail right into Fredericton. 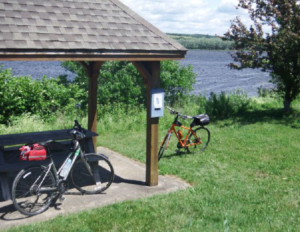 It is worth mentioning here that the trail does not go straight through the middle of Fredericton and there are several streets that need to be negotiated. In order to keep our route as safe as possible we left the Valley Trail and turned left towards the river on Rookwood Avenue.

We rode down the cycle lane to the bottom where it meets Woodstock Road where there is a pedestrian crossing. In principle we need to go straight across, but it is slightly staggered and you have to go a few meters to the left along the Woodstock road until you pick up the trail again. It looks like the trail is cordoned off, but that is just to prevent vehicles from driving down the track. The building that you see down close to the river is where you pick up the South Riverfront trail and you carry on heading east into Downtown Fredericton through a pretty recreational park with access to shops and local hostelries.

If you stay on this trail until you get to the Bill Thorpe Walking Bridge and cross the river there, it brings you right back to your car at the Trail Visitors Center on the Northside.