The thunderous sounds of jet planes was not the only power on display in Miramichi on Sunday, as XCM Provincial Champions were crowned. Bike Miramichi hosted the event, one that has been on the calendar for a number of years. Racers from around the province, as well as Nova Scotia and Prince Edward Island made the trip on the sunny day to take part in the festivities. Race categories were Solo Men, Solo Women, and a team competition, with our ability based categories used in the solo categories to determine Provincial Champions

The Solo Men had there hands full as the field included race winners from this year, last year, and perennial contenders for the top spot on the podium. Julien Roussel, and Jean Richard Cormier were able to get a gap on the field and pull away to fight for the top spot. With time winding down Roussel pulled a gap on Cormier, and set off for his 7th and final lap with minutes to go before the time cut off thinking that Cormier would be chasing him down. Cormier crossed the line with seconds to go, securing 2nd place, but decided to call it after 6 laps know that no one would be able to catch him. Sebastien Boudreau crossed the line in 3rd place, minutes after the time cut off. For Roussel the 7th lap put him well in front of everyone, and scored him his second win on the VeloNB Mountain Bike season.

The Solo Women had a large field that was ready for just about anything. With race winners from past years, this year, and all points in between the competition was sure to be a challenge. In the end Kelly Murrary was able to secure the victory, as she pulled away from the field on the opening laps and rode a strong race to secure the top spot on the podium. The battle for 2nd and 3rd was between Annik Belanger and Tanya Hanham. Hanham held 2nd in the opening lap, but Belanger was able to take the spot the on their second lap and maintain it to the end, with Hanham taking 3rd. 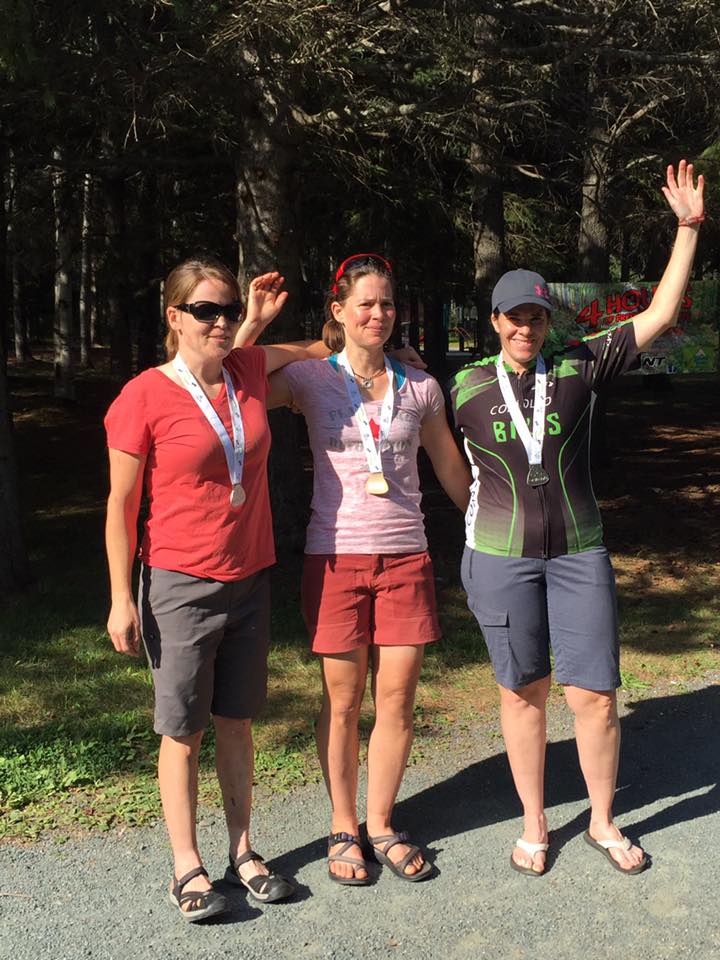 The team competition was won by the team of John Burt and Gil Vautour. Each teammate ran three laps a piece, pulling them to the front of the competition. The battle for second was between the Phillips Family and the “Sams”. In the end both completed 5 laps, but the team of Lisa and Pete Phillips took home second place, followed by Samuel Vautour and Samuel Poirier. 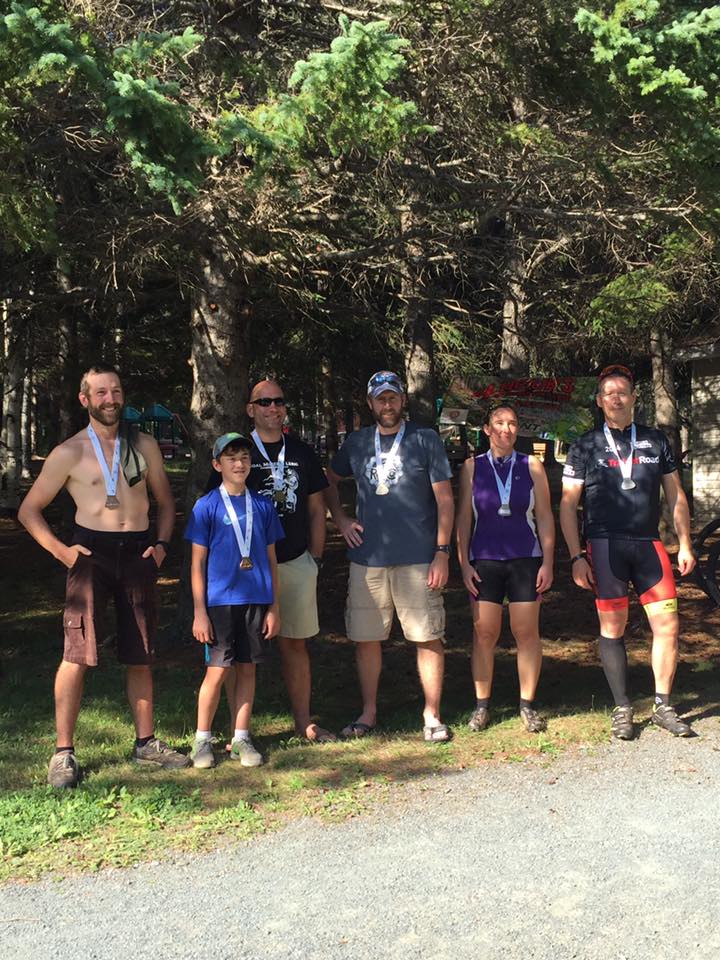 Team podium, “Sams”, Vautour and Burt, and The Phillips Familly.

With the win, Julien Roussel also picked up the Provincial Championship for XCM. Competitors were broken down into the ability based categories as per the seasons Mountain Bike Points Standings. Roussel was victorious in the A Category, Jean Guy Babineau winning the B Category Championship, and young rider Samuel Rioux taking the C Category Championship by only a handful of minutes over Liam Dyker. 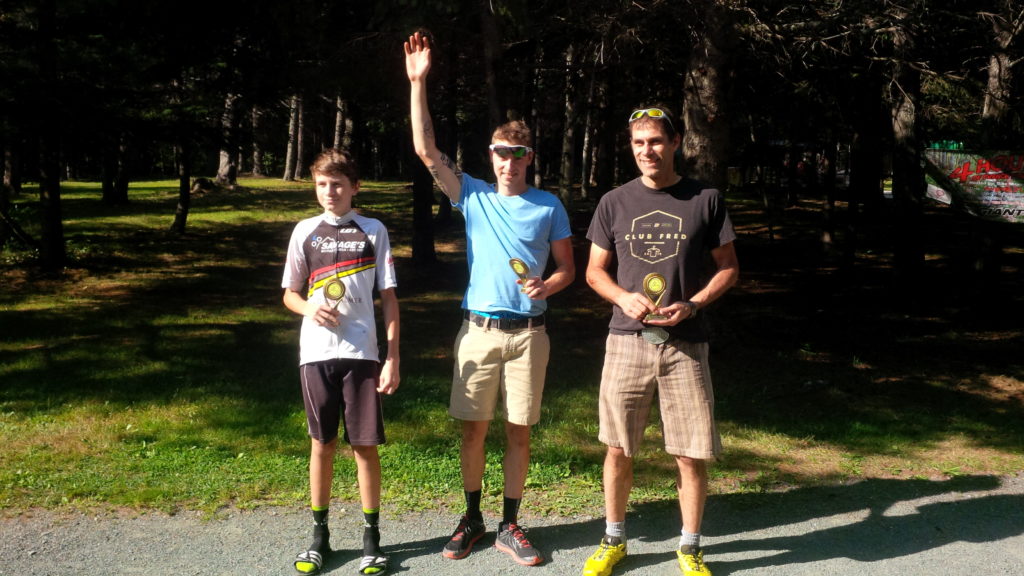 The Womens XCM Championships had Kelly Murray take the A Category Championship as a result of her Solo Womens win. The B Category Championship was won by Sherry Mercer after she was able to sustain a lead built in the early laps. Ella Bragdon once again proved to be too much to handle in the C Category as she took home another race victory in her category after a 4 hour battle with Angie Vickers. 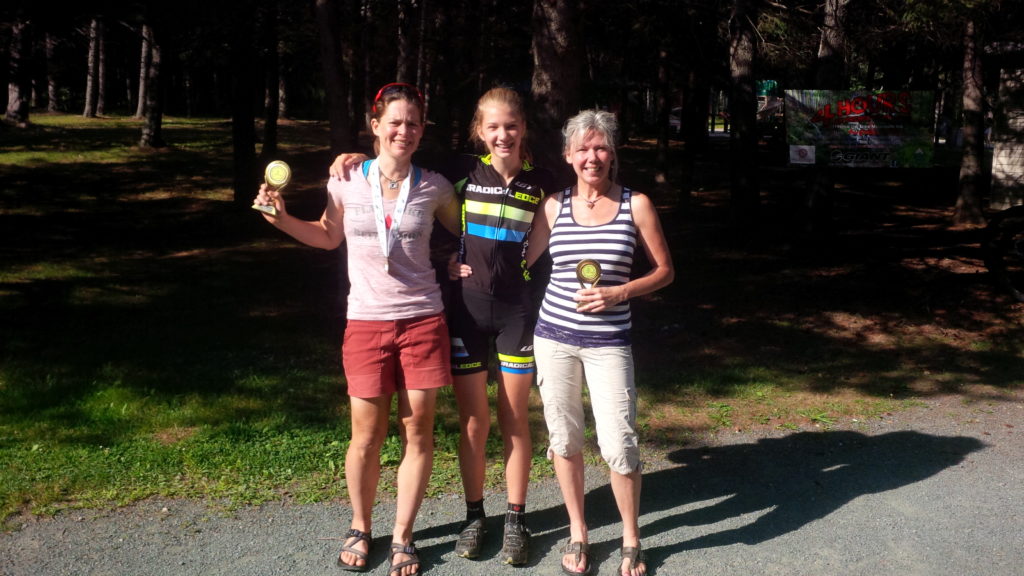 Here are the updated points standings for the top 3 in each category following the race. The best 5 of 7 results count towards the standings. Stay tuned to the Velo NB Facebook Page for complete standings.

In all, one of the staples of the event schedule was well received by all racers. Bike Miramichi has been working hard on making French Fort Cove one the the brightest spots in the province. You can find more information on their activities at http://www.bikemiramichi.com.