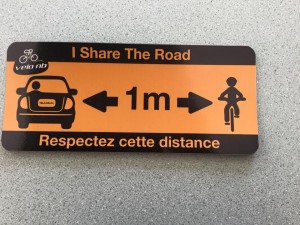 On Nov 09, 2015 a group of New Brunswick cyclists met with Dr Ed Doherty, MLA for Saint John Harbour. The proposal was to sponsor legislation of a collaborative effort by Saint John Cycling, Fredericton Folks on Spokes and the Capital Region Bicycle Advisory Group to increase bicycle safety in New Brunswick by amending and modernizing the New Brunswick Motor Vehicle Act. This action is to quantify a one meter clearance for the passing of cyclists on roadways, plus update subsections and terminology in the Motor Vehicle Act which have been superseded by urban growth patterns and technical progress.